Nootropics that work so well, you have to take LESS of them

There’s no question about it, there are some nootropics that work so well, you actually have to take less of them over time. These are the nootropics to target.

And there are many of them. They are (without wasting time on bullshit):

And likely more. These 4, I’ve had the interesting experience of needing a lot less of them over time.

With Uridine monophosphate, for example, which we put in our powerful nootropic compound Cortex, I use to have to take 150-200MG, which is right around the quantity in the Cortex stack.

I took that quantity, with 75MG of CDP Choline, for nearly a year with cycling (I’d cycle off for two weeks or a weekend here or there), and in time, I found that I needed profoundly less of it to get the same result.

How much less? 75-100MG less. I’d then take a mere 50-75MG of Uridine monophosphate, with the same amount of CDP Choline, and get the same result.

But then – it ended up being the case that a mere 75MG of Uridine, without the CDP Choline produced the result I was looking for (verbal fluency, mental energy, focus, motivation). Insane! 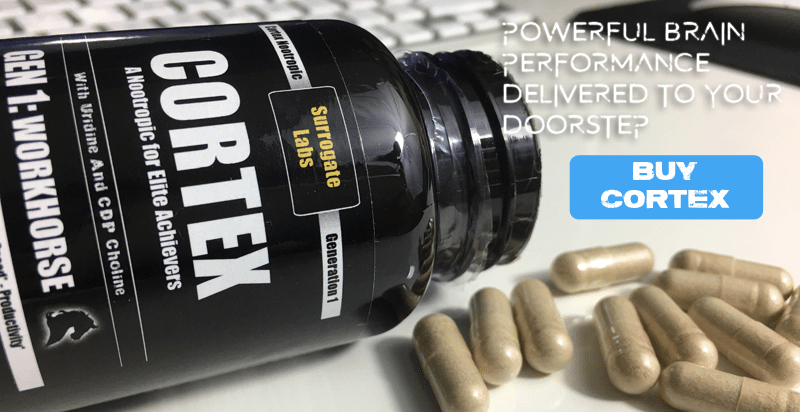 But if you look at what may be going on here, it’s not that crazy. These nootropics (CDP/Uridine) “build” things rather than just “stimulate” things. They build:

And more. Alpha GPC acts similarly in phospholipid synthesis, and donates a bit more choline to the production of Acetylcholine (a focus neuro-chemical) than CDP Choline does.

So – the logical explanation for why you need less of these compounds over time is because they:

And this is AWESOME. I mean… do you want to have to take nootropics everyday of your life to get your brain to function awesomely?

Or do you want to take certain compounds for 6 months or so, cycling, and have them benefit you for 1 year or more?

Of course a lot of this is speculative, but it’s plausible speculation mixed with my own N=1, and of course, actual studies (on Noopept for example).

But there’s no question about it. I require A LOT less nootropics than I did at the beginning of my journey. I apparently had a lot of repairing to do.

The number one reason this is awesome

For me, there isn’t a question in my mind: my brain works better at baseline than it did 8 years ago. I’ve aged to 33 from 25, but have a better functioning brain. I have better:

So – you want to target these types of compounds to improve brain function over time, and I think, that if you can hunt for these types of nootropics, you’ll have a better experience over time.

The one compound that I haven’t been able to consistently (with cycling) take and have it work on my brain in the long term is Modafinil. Modafinil seems very acute, which is kind of good. I’m not sure I would want chronically elevated alert based neuro-chemicals (epinephrine, etc), and persistently inhibited GABA.

But with the acetylcholine precursors, and the multifactorial nootropics that actually “build” instead of just “temporarily modulate,” you’re making positive changes that ultimately make it so you require less of them over time.

In the video, we explain this, how Noopept, Uridine, and CDP choline fit into this paradigm.